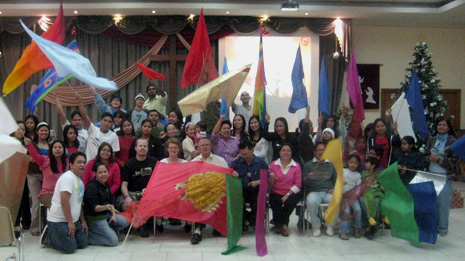 Earlier this autumn, we planned to visit some friends in Al Ain in the UAE. At the same time the church, which belongs to our friends, they want a presentation of Banners and dance. We accepted the request to participate in the Christmas Eve service, and keep two seminars. At 22 December, Torgeir (son and camera man), Elizabeth and Lars, we set off on a trip with our banners to Dubai..

Al Ain is located approximately 13 mil south of Dubai at the border with Oman. The city has 340,000 inhabitants and belongs to the province of Abu Dhabi. They estimate that about 80% are immigrants from 200 different nationalities. These are short-term labor contracts. WIN or Word Ministries International Minestries is the church we visited, and it consisted mainly of Filipinos. The Christians in the UAE are allowed to hold meetings indoors, but not to preach or evangelize in public, nor to pay a church leader.

Between the scheduled programs, we visited several families in the church. They were very hospitable and showed great interest in Banners and dance. During Christmas celebrations on Christmas Eve, Elisabeth performed a worship dance with elements of Banners. After the service it was laid the table for 250 people. Afterwards we cleared the tables, and we spend the rest of Christmas Eve and the night with the fellowship, participating in the Worship Celebration. We experienced a family church and a sibling communities characterized by joy, devotion and a deep trust.

During 1. Workshop we have lessons for the congregation in basic movements of how to use Banners. The children were given small Banners and the women got bigger. While the men received the biggest Banners. The dance was choreographed for three different groups and each group had to learn their movements. Finally, we put it all together as a whole to the hymn Holy, Holy, Holy (Tore Aas, Oslo Gospel Choir). The response was good. For many it was like a revelation. They exclaimed that they felt the Holy Spirit touched them. It was good to see the men's enthusiasm, their liberation and redemption, and to hear their shouts of joy to the rhythmic clapping. 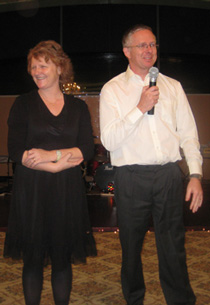 We repeat the dance with Banners during the 2. Workshop. Lars explained Banners significance to Moses and the people of Israel, in the slave period in Egypt, during the exodus and the wandering in the wilderness. From ancient Israeli tradition, Israel had 4 main Banners. An angel went probably before the Banner with the "Lion of Judah", while on one side of the people was probably the Banner of "Son of Man" and another the Banner of "Bull". At the back of, they probably wielding the banner of "Eagle", as it protect and carry. Lars underlined the prophetic dimension, how the Banners prophesy Messiah and the end time. All participants were given their own compendium. It was also taught about ministering with the Banners. Participants went into groups of 3 and minister through praying for one another by using Banners. Several were affected bby The Holy Spirit during the exercise. Lars also shared some pictures he had received from God concerning the church. Pastor Edward decided immediately that every family should have its Banner (4 Gen. 2.2). Sew-groups would be established, to sew Banners to use at start of dance groups.

At 30. December we returned to Norway. The car was covered with snow at the airport, and at a temperature that was about 40 ̊ degrees lower than what we left in the UAE. We are deeply grateful to the Lord for all He showed and taught us, and letting us serve Him right in the Arab World.