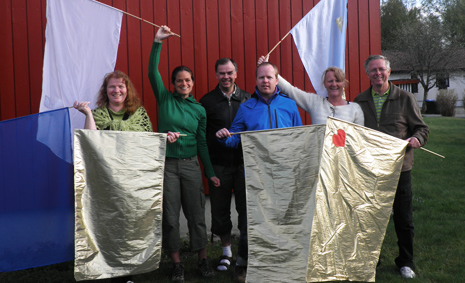 ”For we are God’s workmanship, created in Christ to do good works, which God prepared in advance for us to do.”
Eph 2:10


Kerygma is a Greek word, which means proclamation, announcement, as when announced by the King’s representative, on the behalf of the King. The word is used in NT, in settings where a message is heralded or proclaimed (Rom 16:25; Titus 1:3). We proclaim Jesus Christ through Banners. Our Kerygma will highlight what Jesus does, and will do, when we use Banners.

Since February 2010 God has laid in our minds to visit Denmark, to pray and to proclaim Jesus Christ. In fall 2010 Anne Maria Langmoen visits her friends Karin Havmand and Birgit Davino in Copenhagen, in order to prepare a possible Denmark-tour with Banners and prayer team. During the same period the Lord spoke to Lars about going to Himmelbjerget (the highest hill in Denmark). He was also instructed to bring a golden Banner. The object was to pray Denmark and the Royal family. This took place April 28th to May 2nd 2011.

Three weeks before we left for Denmark several of us were fasting and praying for the country and the Royal family. Those who travelled together were: Ingjerd and Jo Hedberg (“Prayer for the Norwegian church”), Anne Maria Langmoen, Torgeir Godman, and Elisabeth and Lars Godman. Our goal was network building, encouraging one another, and get in touch with what the Lord is doing in Denmark and the Nordic countries.

The Lord blessed and encouraged us through all those people we met. We felt that we were In God’s timing, on right places at right times. Besides, God gave us wonderful weather, which sort of “followed” us throughout the journey. While driving through Bohuslän, Halland and Skåne (in Sweden), we prayed for Sweden. I Halmstad we were heartily received by our good friends Lena and Lasse Lagerqvist, and we were their guest even on our way back.

We witnessed the hand of the Lord! Birgit, a lady we stayed with in Denmark, had the wonderful experience of her mother receiving Jesus on the day we came to Copenhagen. Problems as colds, back- and knee pain, that we suffered from just disappeared. At Nakkehoved lighthouse we gathered in groups, facing the sea. Banners were lifted up in the wind, while we proclaimed what we felt on God’s heart for the Nordic nations. We sensed how en old cult place nearby was changed into a place of worship. Karin saw how the Fire of God descended at the place while we prayed.

At Amalienborg, the Queen’s castle, we prayed for the Royal family. Kitte from Thisted joined us. She had on her heart especially to pray for the Royal family. We felt led by the Lord to pray with Banners, and Kitte had the Danish flag, “Danebrogen”). We marvelled, as queen Margrete actually arrived in her car, as we were in the act of finishing our prayer! The car passed close by us, heading for the castle. A member of the guard approached us, wondering what we were up to. We told him that we prayed for the Queen, her family and Denmark, and even that God had commissioned us to do so. He immediately reported what we had said back to the man in charge of the guard, via microphone. We were then told to conclude our prayer. Our mission had been fulfilled, and we left, rejoicing.
Saturday evening a festive evening was celebrated for the Lord. It actually coincided with the “World day of dance”. We were gathered in Karin’s home, rejoicing and worshipping. After enjoying a delicious, Israeli festive meal, Kitte led us in various Israeli dances. We praised God for His wonders! 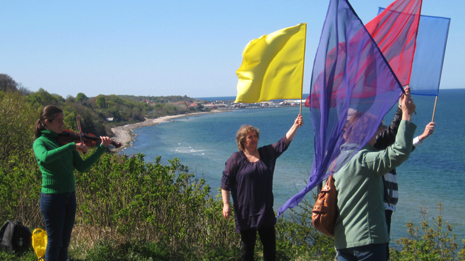 On Sunday we took part in a service in Gospel Church International. Even at that occasion Denmark was lifted up with Banners, prayers and singing. During intercessions people, both children and adults were encouraged to take place under the 7 meter long golden Banner that Lars and Elisabeth brought, to let the Lord minister to them. Several people were touch by the Lord. Peter Barnes (England) afterwards shared what God had laid on his heart. He spoke prophetic words. One of these had reference to Norway concerning God’s plan related t Banner ministry in the last days.

During the trip we were given quite many words and pictures. One was about angels escorting us. Pictures were confirmed. And we even experienced the special care and protection of the Lord. The Lord was gracious even by given us good weather. After the meeting in Gospel Church International Sunday evening, our Danish friends experienced a sudden, unexpected heavy rainfall, accompanied by thunder and lightning. They received this as a sign from God and started to sing: “Let it rain”! On May 7th the message reached us that Birgit’s mother had a peacefully death, to be with Jesus in her heavenly home.

The trip to Denmark became a training tour in discipleship. Our only desire had been to be the Lord’s obedient disciples.

Spring 2012 Denmark holds the EU presidency. Europeian Union of Prayer, to which some of us belong, is planning a conference, aiming to pray for Copenhagen and Denmark. “Himmelbjerget” is still not climbed! When the Lord gives the opportunity we will return with Banners to Denmark, Copenhagen and “Himmelbjerget”.

Heavenly Father we pray:
for salvation for the Royal family and the Danish people. For God’s peace and reconciliation between the Nordic nations.