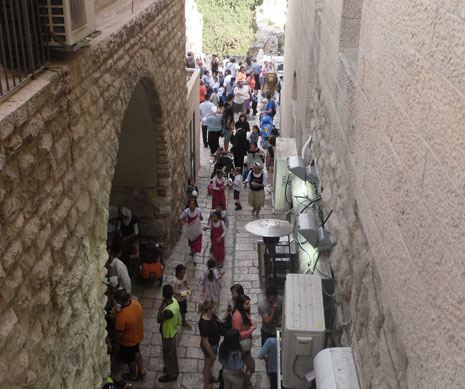 We had in our mind, once to make a tour to Israel. This fall however, our plans to visit Christian friends in Madrid. But Spain is a land of unrest and instability, and suddenly the Lord stopped our plans. Once again the Lord spoke to our hearts:”Go to Israel, there I will meet you”. We got scriptures from John and Matthew by which the Lord spoke that he would meet us in Jerusalem.

On Sep 29th we started from Gothenburg via Munich, and landed on Ben Gurion airport at midnight. The humid warmth surrounded us. We rejoiced over the nice temperature of 32˚C, and for being in the Holy Land. We had this longing of meeting the people today´s Israel, so we chose to stay in Tel Aviv the whole week in quite a cheap hotel in a less attractive area. There we praised the Lord of Host for His goodness and care for us. Elisabeth had just previous of the trip broken a rib, and she suffered from back-pain as well and needed to rest often. This was quite challenging, and the Lord narrowed over the schedule to focus on the most vital parts of our plans. The hotel was located only 2-300 m from the beach. To have a bath in the pleasant Mediterranean water felt like a healing experience for body and soul.

Diamonds from Heaven.
One day we sat on the beach, the sky darkened and thunder broke loose. The lightning struck vertically down in the sea with mighty light flashers. We sensed the close presence of the Lord. Then Elisabeth got a vision: She saw thousands of white shining diamonds, falling from heaven like snowflakes, accompanied by the sound of thunder. Yes, we felt the presence of the Lord!

The great city Tel Aviv.
We experienced the pulse of Tel Aviv, this. We went by city-bus, walked the streets, visit parks, malls, the central bus-station. In the nearby grocery-shop we bought food that we could have in the fridge. Orthodox Jews were hardly to seen here. Everywhere it was security-controls. We were always checked at the central bus station and at numbers places We were struck by the poverty and realized some of the challenges Israel faced.

As in most big cities, beggars were frequently seen. In the parks surrounding the station were hundreds of illegal, Sudanese refuges – an issue of intense debate.
Today Israel is a high develop multicultural society. Jewish immigrants from all corners of the world are received here. This is the people with the big heart. We marvelled: How can Israel manage to handel the growing number of immigrants and integrate them in society? The taxi-driver told us that the number of citizens has passed 8,6 millions. Soon 9 millions! Not all immigrants are successful. In a stair-entrance of a building next to the hotel Comfort, 3 alcoholic Russian Jews, one woman and two men had found shelter. When sober, they quarrelled, but most often we found them drunk and sleeping. The Israelis were at large nice and service-minded, happy to see tourists in their land. But we were surprised by the number of sullen chauffeurs, especially those driven the sheruts (mini-busses).

Up to the City of Jesus, Jerusalem.
The renowned (Norwegian) hymn by Eyvind Skeie was brought into our minds:

”See, we go up to Jerusalem, but who will share our Lord´s pain?
Who is watching with Jesus in the night of this world,
who carry His sorrows in their hearts?”

The first day was spent on orientating. The city has 800 000 inhabitants. We bought a map over the city and just followed tramway-rails to the Old City. In this part of Jerusalem it felt like time has stopped. We found ourselves in a throng of a people, nationalities, languages and religions. Jerusalem is important in God´s salvation-plan. The devil knows it, that´s why he is active and causes confusion. While roaming around, we prayed and blessed the city and the people, poor, the beggers and the prosperous.

Outside the wall, at the Jaffa gate, we made a stop. A beggar ran forth to us, asked if we were Christians, kneeled reverently and asked if we could pray for his back-pain. We were really walking in our Master´s footsteps! For sure beggars and sick would search their way their way to Jesus even as He walked this city, didn`t they? Yes, and Jesus stopped and touched them.
Back inside the walls again, viewing over the Kedron Valley, we paused to study the map. An orthodox Jew approached us and guided us into the Jewish quarters of the Old City.

The peak-experience was after all the Jerusalem-march on Thursday. Security-forces and police were counted in thousands. In due time ahead of the march they had blocked several streets. Tribunes in honour of prominent guests – both domestic and from foreign countries – had been prepared. On one of the tribunes we saw 6 former Russian officers of the Red Army with their medals twinkling in the bright sunshine. In Sacker Park, at Knesset, delegates from more than 90 nations were marching under their banners and national flags. It was a breathtaking spectacle! The whole city seemed to be on their feet, quit like Oslo´s mainstreet”Karl Johan” on national day May 17th.

The Jewish celebration of the Feast of Tabernacles (Hebrew “Sukkot”)
Feast of Tabernacles means holiday for the schools and festival arrangement the whole week. We saw the typical orthodox Jew with his numerous flocks of children, all in their best clothes, hurrying to their appointments with friends and family. The leaf- and branch-tabernacles, built in the same fashion since time immemorial, were seen everywhere: On the sidewalks, outside stores, restaurants or on the balconies of the homes.
Friday, just at the beginning of the Sabbath, was also the starting point of the celebration. In our Sherut-taxi, on our way to Jerusalem, we were stopped and controlled and directed to drive a road that passed a strictly guarded Israeli area. Obviously we were passing through the West-Bank. This Friday afternoon people came from afar in crowed cars, hurrying to Jerusalem for the celebration. A massive police- and IDF forces were present to advert terrorist attacks.

This also added to our experience a strangely mixed feeling of simultaneous security and fear. We were all really carefully watched over that day. Our plan was to walk on the walls of Jerusalem and pray over the city. Carefully, aware of being watched, we lifted the blue Banner (Kingship, majesty, authority) and prayed:

“Come Lord Jesus, King of Kings. Save and bless our people Israel. Reveal Yourself to all of us. Amen”