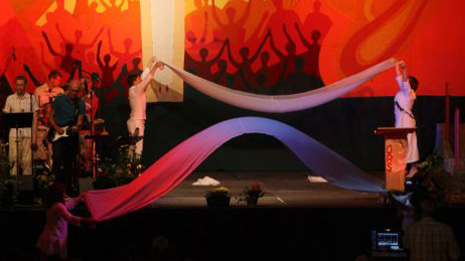 ”Sing praises to the Lord, who dwells in Zion! Declare His deeds among the people.” Ps 9:11

Thanks to Jesus, for OAS in Borås in Sweden 20-24 july! We believe He is preparing, through the OAS, among others, His bride in Sweden for His return. Our involvement was twofold during the OAS. We both participated in dance team on all afternoon and evening meetings. And we had two seminars on "How to use Banners in worship". In addition, we lent approximately 100 flags / banners to the OAS people. In Norway we had a special prayer team prayed for us before and during the OAS.

It was a great pleasure to participate the dance team. Diana was obvious that we should be in worship; proclaim Jesus from our hearts through our dances. On the platform, we experienced peace and concentration. Through some of the dances we noticed that the power of God went out from the platform. In the preparation, we were involved in all exercises in Jäla and Herrjunga. The dances were filmed and distributed, so that we could practice at home. For Lars it was a special experience. Actually, he should join as a child minder. Despite the fact that he was not a dancer, he felt he was influenced to be with the dance team anyway. He wanted to give the Lord Jesus and the team a chance. Diana and the teammates had the patience and goodwill to this. Throughout the week, he felt God was doing a transformation, a miracle in him. Condemnations and self reproach disappeared. He could dance for God, for God's glory. God asks us in obedience to enter the works we cannot do of ourselves (John 14.12). His mighty arm will be with us (Isaiah 63.12). We also had fantastic support in Tommy, the Oas-chaplain, who prayed for us before and after each dance. We had also time to get good food between the items. It was necessary breaks. 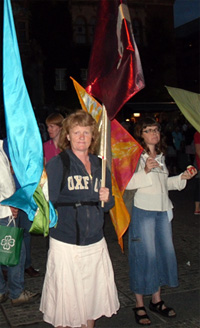 Thursday evening, we participated with the Banners on the square. On the outskirts of the crowd we had to endure word of abuse from young people. We knew that it cost to confess Jesus' name, but we also knew the joy and pride by standing under the Banner. On our way back to the hotel, with our Banners on the shoulder, stopped two gangs us. One of the first group asked the others to proceed. He told us that he was unemployed and wanted prayer. He gave his life and future to Jesus, then and there. About 50 meters later stopped a new group us. The leader walked with crutches. Hi told us that his brother died last year, his girlfriend had left him and his mother was involved in spiritism. He was convinced that God did not exist and demanded evidence. We proclaim the contrary. Jesus lives and is here now, at this moment. He gave us permission to pray for his knee, which was destroyed because of an accident. He had rivets in the leg. Lars knelt down and put his hands on his knee. Curious youths flocked to the outside of the pub. Nothing happens, but Lars prayed for the knee once more. "There, you see, God does not exist!" He shouted. Elizabeth asked if she could lay hands on his heart and pray for his heartbreak, and she was allowed to do that. She prayed. He received peace and was totally silent. Then someone in the crowd around came up and said, "I know him. Something happened to him ". We said we would continue to pray for him. He gave us his name and we proceeded to the hotel. The crowd dissolved quiet and we were left in peace. God be praised! He touched two youths (and maybe more). Jesus moves among young people, in Sweden too.

On Friday and Saturday we held the seminar: How to use Banners in worship? The seminars had two parts, a theoretical part with the biblical foundation, and a practical part. A total of 25 people participate, most of them had no experience before. Good to see five men in the group. We had a special pole-element only for men. It was important for us to equip and inspire participants to use the Banners. So they got a compendium in self-study. The day after we received a mail from a satisfied participant who had purchased a Banner and practiced it at home. The seminar host with his assistants did a great job and made us safe. We also provided a film clip from You Tube on the Internet. To have this good cooperation with the host seminar was great. A good thing we want to take with us to the Norwegian Oase.

Thanks to the Oas leadership and thanks to God.